Just got word that the Deal Island Skipjack Heritage Race has been Cancelled for 2020.  :-( 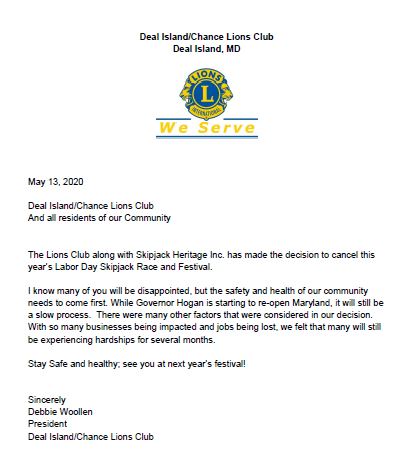 Eden - Elbert Edmond Gladden, 85, of Eden, MD, entered his heavenly home on Thursday, December 19, 2019 from Coastal Hospice At The Lake in Salisbury. He was born in Mt. Vernon, MD, on October 13, 1934, to the late Elbert Windsor Gladden and Chlora Blanche Causey Gladden.

He is survived by his loving wife of 63 years, Drusilla "Dru" Conley Gladden; a son, Dean Edmond Gladden and his wife…
Continue

The Ida May won the Deal Island Skipjack Race for the Third Year in a Row!!!  Here is the full article from the Daily Times of Salisbury by journalist Julia Rentsch.  The article is entitled:

"With a sharp cannon blast, they were off.

The skipjack, Ida May, won the 2018 Choptank Heritage Race for the second year in a row.  Thanks again to Capt. Shawn Ridgley and his able first mate and brother, Wes Ridgley!  Congratulations also to owners Elbert and Gordon Gladden.

We wondered how we would fare in today's race with much heavier winds than there were in Deal Island a couple of weeks ago.  The experts said that the Ida May was just a small wind boat, but we proved them wrong after today's…

The skipjack, Ida May, won the 59th Annual Deal Island Skipjack Race.  This is the second year in a row for the Ida May to be the champion.  Congratulations to Capt. Shawn Ridgley and his able first mate, Mike Oh!!!  Congratulations as well to owners Elbert and Gordon Gladden.

There was very little wind for the race.  The Tangier Sound was glassy and the skipjacks' sails were slack, fluttery.  The Ida May's yawl boat was having engine problems, so we decided to let someone tow…

Ida May featured in May 2018 Chesapeake Bay Magazine

The Ida May's victory in the 2017 Choptank Heritage Skipjack Race in Cambridge MD was highlighted in the May 2018 edition of the Chesapeake Bay Magazine.  Here's the link to read the article.

The Ida May is back home in Deal Island Harbor.  Keith Whitelock and Gordon Gladden brought her back home from Cambridge, fresh from her victory at the Choptank Heritage Skipjack Race.  The Double Crown of skipjack racing belongs to the Ida May in 2017.  This was a sure our year!

The Ida May has pulled off the double crown of Skipjack racing by winning the 2017 Choptank Heritage Skipjack Race today, having already won the Labor Day race off Deal Island.  Wow! We are ecstatic and so proud of the Captain, Shawn Ridgley, and his first mate, Michael Oh.  The race was tight from the start with boats jockeying for prime position.  We were sandwiched between the Rosie Parks on our starboard and the Lady Katie on our port.  These boats were so close to us that I could've…

The Ida May came in first place in the 2017 Deal Island Labor Day Skipjack Race!!!!

Thanks to Capt. Shawn Ridgley for sailing a great race!!! Amazing!!! What a great day.  Elbert and Gordon Gladden are very proud.

We blew away the competition, stealing the other boats' wind and passing the fleet on the way to the first buoy.  We then kept our lead the entire race and put much distance in between us and our nearest competitor.  It was a perfect day to sail,…

Whew!  We had lots of wind and two reef points in our sails for the Choptank Heritage Race 2016 in Cambridge MD.  It was a day for the big boats and the Rosie Parks won by a long margin.  The Ida May was in the middle of the pack.  We finished the race with a 6th place finish.  Great job, Shawn Ridgely!!!

Congratulations to new captain, Sean Ridgely, who did an admirable job at the helm of the Ida May.  It was a great race and a perfect day.  The Hurricane blew by and left us with brisk but manageable winds.

The Ida May is back home to Deal Island Harbor.  Thanks Keith Whitelock for helping out!!!

The Ida May is in Salisbury, docked on the Wicomico River, for the Winter 2015.

Congratulations to the captain and crew of the Rosie Parks who won the 2015 Choptank Heritage Skipjack Race!!! It was a windy day and perfect for those big boats to fly.  The Ida May didn't have a chance.  The Rosie was faster with her jib down than the Ida May with full sail.  We had a wonderful time and Capt. Jimmy Murphy did an admirable job in the rough conditions of the Chotank River.  Thanks Jimmy!!!…

Thanks Jimmy Murphy, Frank Antes, and Keith Whitelock for bringing the boat up to Cambridge MD from her home harbor in Deal Island MD.  The Choptank Heritage Race will be on 9/26/15.  We didn't make it up last year, and the year before, well, let's not talk about the year before.

The Ida May remembers Capt. John Price, who died just one month ago.  We miss you John!!!

Dickie Webster stepped up in our time of need and took the helm of the Ida May in this year's Deal Island Races.  Thank you Dickie!

There was no wind at all.  It reminded me of those years in the 70's and 80's when we'd bake under the sun and drift in the tide.  There was such little wind that the finish line became the first buoy, and only half the boats could even make…

With a heavy heart, we inform you that the Ida May's Captain John P. Price, Jr., passed away on Thursday, July 30, 2015, at Peninsula Regional Medical Center in Salisbury, Md.

We love you, John, and we will miss you dearly!!!

The documentary film Beautiful Swimmers is an initiative of the Bay Journal, a publication of Chesapeake Media Service, a 501(c)(3) nonprofit.

The Bay Journal has been delivering exceptional coverage…

Welcome to
IDA MAY